A presentation of Picea, a work in progress of composer Lauri Supponen and violinist Eriikka Maalismaa. The exhibition is in diary form, with irregular posts tracing the process until the premiere in June.

On this page you will find a series of posts describing various stages and approaches into the composition work.

The final piece is scheduled for premiere in June 2021 at the Music Centre, in Helsinki, alongside four other works commissioned by Maalismaa from young Finnish composers.

A centennial member of a centimillenial family, inhabiting the northern slopes of the Paneveggio regio of South Tyrol in Italy.

A refraction of light, a densening of the atmosphere sensible to a wanderer, a forest guard, a luthier, a composer, a violinist walking through the Bosco che suona, the Forest that Sounds.

Spruce is the most common material of the soundboard of a violin. The individuals growing on this Alpine slope are especially valued for the sonic properties of their wood. Their regular grain and the density of their growth rings enable a steady breathing of the wood during it’s service as an instrument.

The watershed of budding capitalism determined whether a trunk floated down the Brenta and Piave to fuel the insatiable arsenal of La Serenissima, or down the Aviso and Adige to the workshops of luthiers in Cremona. In Venice, a spruce was both a violin and a war galley, a fate determined by a few hundred metres of Alpine slope.

Before and after Eriikka spent a week at the residency, I engaged myself in two practices to support compositional work.

I read about trees.

Emanuele Coccia, The Life of Plants

I went out to observe trees.

A large, old spruce tree at the edge of a forest clearing. Near the Suomela-Hatunperä cross-country skiing tracks. I hereby give it the nickname Bonzo.

Two pines, massive in comparison to the hundreds of their kin growing in tree-fields, left standing by the Ruhankangas road, a few metres past the communal nature-path.

The Ruhankangas old spruce. Possibly left standing for nostalgia reasons, or similarly to hundreds of counterparts especially on crossroads – as a landmark.

Through the ebbing and flowing of these two practices, I found myself attempting to think differently about trees and subsequently about the world as a habitat for trees.

Myself. (the air I breathe)

My work as a composer. (the paper I write on)

In a habitat created by trees.

In Overstory, Richard Powers communicates his observations and research of trees and forest ecosystems in form of a ‘good story’. As for him, it is through a ‘good story’ that he may attempt to reach humans and facilitate their awakening into a world where trees are protagonists.

The Life of Plants is a meandering flow of poetry and philosophy that looks for an existence as defined by plants. Our very consciousness made possible by the improbable life plants continuously create, and in which we humans float like jellyfish in water. Thickenings of the air in an atmosphere created by plants and trees.

Magnason recounts the destructive effects of global economy on the precarious ecosystems of his home country of Iceland. His beautiful, taoist meditations on empty space continue to have deep effect on me. As if continuing Allen’s observations of the transposition of wooden sticks, he quotes Laozi:

Thirty spokes coming together make up a wheel
but it is the hole for the axle that makes the
wheel useful.2 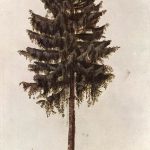 This illustration by Albrecht Dürer (incorrectly names Pine, although it depicts a Spruce) straddles in between a scientific document and a technical study. An allegory for a piece of contemporary music, often of an equally unspecified nature.

Send me a message

If you’d like to reach out and discuss my exhibitions or purchase an art piece, send me a message using the form below.